Majvik was part of the Porkkala area that was leased to the Soviet Union for 50 years as stipulated in the armistice signed at the end of the Continuation War in 1944. The boundary of the leased area extended along Espoonlahti and from where the modern ring road and railroad converge to Humaljärvi. The border can still be seen near the Luoma train stop.

The af Forselles and the Weckmans were forced to leave Majvik, which had been emptied. As they departed, af Forselles left a page torn from an illustrated book on his door in which Governor Wibelius, as depicted by Runeberg, remarks with his hand on a law book: “The law born before I, shall live on.” 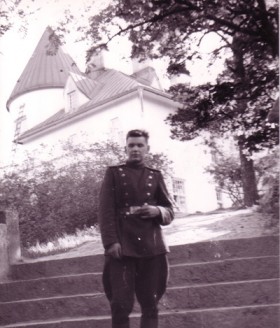 During the Russian occupation, General Kabanov’s intelligence headquarters were located at Majvik, partly because, at 43 metres above sea level, it is one of the highest points in Kirkkonummi. The main building housed both a radar and a radio station. The slope had a lookout point onto Espoonlahti, while antennas were connected to nearby trees. The garrison commander stayed at the ‘Lilla villa’ and tight control was kept over the area. The echo of marching songs could be heard across Espoonlahti to the opposite shore.

In front of the main building, where the sundial now stands, the Russians left a small statue which resembled an upside-down flower pot. A red star made of pebbles was set around this statue; the Weckmans called it ‘Stalin’s hat’.

In 1956, the Soviet Union returned Porkkala to the Finns and the Weckmans moved back to Majvik. By that time, however, Professor af Forselles had already died — in 1953. The Russians left behind a house in poor condition; for example, only two of the tile stoves worked. The Weckmans, however, restored Majvik so that people could once again live in it.