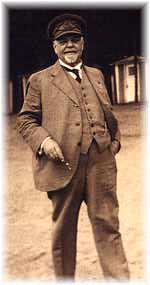 The plants were brought from many places, including Suomenlinna. The commander of the garrison at Suomenlinna, Admiral Studentsky, was a patient of af Forselles. Af Forselles’ wife, Emma Adele Kolster (1869–1923), the daughter of Professor Rudolf Kolster from the Polytechnic Institute, was an avid gardener. Emma had cartfuls of dirt and bog soil driven up to the top of the hill for her plants. The dirt came from an area behind the train station at Masala that af Forselles had bought for this specific purpose.

Af Forselles was interested in technology. He designed the villa’s plumbing and installed a telephone in both the bathing hut and the garage.  He was also the founder and long-term chairman of the Finnish Automobile Club. As he was a surgeon, Forselles was good with his hands. He once removed a loose bolt from a car’s exhaust pipe with string and a poker, as the mechanic was unable to remove the noisy bolt by himself. “This is just like removing someone’s tonsils.” af Forselles is claimed to have stated.

The shore held a barn, a stable, a pig sty, the guard’s post and the bathing hut. For his daughter Anne-Marie, the professor built a tennis court north of the main building in a sheltered recess.

In those days, the journey from Helsinki to Majvik was made either by train or on board a boat called ‘Adlercreutz’. For special guests, the train would occasionally stop at Majvik on its journey between Turku and Helsinki. A considerable number of high-ranking members of Finnish society visited Majvik, including Mannerheim, Svinhufvud, Kallio and Tanner. Af Forselles once remarked that Tanner’s habit of smoking expensive cigars was clear evidence of how the proletariat smoked good cigars and the capitalists, shabby ones. Long games of vint were played with select friends.

Later on, af Forselles purchased more land for Majvik from the land offered him by local landowners who were desperately in need of money. In 1937, the ownership of Majvik was transferred to af Forselles’ daughter, Anne-Marie (1903–1994), and her husband, Jarl Albert Oskar Weckmann.